Anna Koch was born February 17, 1864 in northwestern Germany. She came to America with her family when she was twenty years old, enduring a rough voyage from Holland. When their ship, the S.S. Rotterdam, was well out to sea, a terrible storm came up. The winds tore a hole in the side of the ship, so that even the captain thought they would all be drowned. Anna's father, Frederick Koch, and a friend, Mr. Fudiker, began to earnestly pray for the safety of the ship. Suddenly, the ship lifted up and rolled to the undamaged side, offering the crew an opportunity to bail out the water and repair the wooden hull. As soon as repairs were done, the ship righted itself and carried its grateful passengers to America!

The Koch family settled in Kansas, where Anna met and married Gustav Preuss, also from Germany. They moved to the rolling hills of southern Wisconsin in 1892, because the flat lands of Kansas did not appeal to Mr. Preuss. Wisconsin was more like his native Germany. They lived in a log cabin while Gustav, a carpenter, built the farmhouse. Together they had two sons and seven daughters, and built a prosperous farm. Their daughter Emma recalls the orchards, grape arbor, wild berries, fresh butter, wild game, popcorn, and other wholesome foods harvested and enjoyed by the family. She also had fond memories of sleigh rides over the snow-covered hills.

In the midst of gardening, canning, and cooking, the Preuss women also had to sew clothes and knit stockings and mittens for their large family. All the girls stitched samplers and learned to sew and knit like their mother. Daughter Claribel recalls a sock knitting machine that was cranked by hand to produce the tubular parts of the socks, while the heels and toes were done by hand. And yes, there was even time to produce some fancy needlework: probably by lamplight during those long Wisconsin winters. Anna had cedar chests made of cedar from the farm. These held her embroidery and her quilts. She gave embroidered pillowcases to each of her seventeen grandchildren, and several of her quilts survive today. The tree quilt in my closet was made by Anna and given to her youngest daughter, Claribel, who then passed it on to her grandson, Keith Schimmel. The tree blocks are hand pieced of assorted cottons and hand quilted. It was made to fit a double bed.

In February of 1916, a traumatic event shook this family. Gustav left the house with his dog and some traps, announcing that he was going to check his trap line. (Trading furs provided an additional source of income for the family.) At dusk, the dog returned without Gustav. Fearing he had fallen somewhere in the wooded hills and was injured and freezing, neighbors searched long into the night by lantern light. To this day, no trace of Gustav Preuss has ever been found. Though there was much speculation and gossip, the family quietly concluded that they had been abandoned. With typical German determination, they made plans to carry on. Anna and the four youngest daughters, Becky, Ruth, Anna, and Claribel, moved to the nearby town of Prairie-du-Sac, where they turned to dressmaking for support. Eventually all the Preuss children married and had families of their own.

Anna's descendants include many accomplished needleworkers, including daughter Claribel, who was especially fond of cross-stitch and knitting. Claribel's six great grandchildren all slept under hand-knitted baby blankets, with cross-stitched pictures framed above their beds. Claribel had to ask a cousin, Marianne Conner, to finish her last cross-stitch project, as her eyesight was no longer up to the task. She did, however, continue to knit for several years after that. All this collected needlework is now being preserved for the future great-great-great grandchildren of Anna Koch Preuss.

So, the tree quilt survives today as a witness to the life of one woman who survived a perilous voyage, nine home births, and even abandonment by a spouse. She survived these things and produced, in the midst of these hardships, things of beauty. She also passed her skills and her love of fine needlework to her many descendants. May we all go and do likewise, turning hardship into an opportunity to make something beautiful!

Sources: 1. Letter from Jane Vogland to Betty Wheeler, dated August 30, 1991
2. Story of the voyage from Lydia Bloeker
3. Handwritten manuscript "My First Ninety Years" by Emma Preuss Wegner, written July, 1987
Posted by KSchimmel at 12:51 PM No comments: Links to this post

I just ordered "The Best of Interweave Crochet" from Crafter's Choice.  I perused the book at a Barnes and Noble book fair and decided it was worth ordering.  Now I've met my membership obligation to Crafter's Choice and can enjoy all the books I got with my initial membership.
Posted by KSchimmel at 1:14 PM No comments: Links to this post

Toe-Up Socks: My First One

Yes, I am still working on the purple dress (sleeves set in perfectly, just need to hem the skirt.)  But I also started some small knitting projects to work on while waiting for flute lessons, sports practices, and such.  One project is an outrageous scarf made of all my leftover bits of fuzzy novelty yarns.  The other is a mini sock I am making as a swatch before trying some of the socks in "Toe-Up Two at a Time Socks" by Melissa Morgan-Oakes.

I stopped by my local yarn shop (Stitch Point on Friendly Avenue in Greensboro, NC) and splurged on some size 1 Addi circular lace needles with a 32" cable.  These needles are wonderfully fast, with a smooth join that stitches just glide right over.  My yarn is some Red Heart Baby Soft I bought at Goodwill--full skeins in perfect condition!  The money saved on yarn paid for the new needles, right?
Posted by KSchimmel at 4:39 PM No comments: Links to this post

Email ThisBlogThis!Share to TwitterShare to FacebookShare to Pinterest
Labels: knitting

A Book Review for Knitters and Crocheters

This book is one of my newest acquisitions for my knitting library. There are some beautiful flowers and leaves in this volume as well as the many birds and butterflies.  I’ve crocheted some nettle leaves to add to a scarf I’m making and plan to try some of the flowers for hair clips.  There is a dove in the book that would be a wonderful Christmas decoration or part of a wedding centerpiece.

I am only beginning to imagine how much fiber fun I can have with the instructions in this book!
Posted by KSchimmel at 9:31 AM No comments: Links to this post 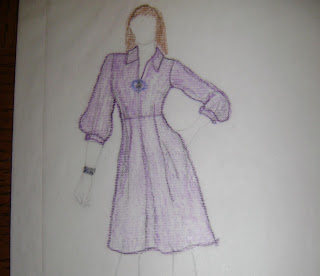 Posted by KSchimmel at 10:06 AM No comments: Links to this post

The Purple Shirtdress is cut out and sewing has begun.  On a trip to Wal-Mart for milk, I also happened upon a bolt of pink georgette for $5.  Yes, it is thin and polyester, but for $5 I can afford to resurrect some patterns that have been sitting idle since the eighties--and try a few new ones.  The resulting garments will be pink, so I am bound to wear them sometime!

Yes, I am ADD.  I like to have several sewing projects, several knitting projects, and a half dozen books in progress at any given moment.  I flit from book to project to project to book........and back to the Purple Shirtdress.  I chose to make the view with the pleated skirt, pointed collar, and 3/4 sleeves with band.  I have a lovely photo of my croquis, which is trapped inside the digital camera until I can enlist a child to help me get it on the computer.
Posted by KSchimmel at 11:11 PM No comments: Links to this post

I Want a Purple Dress

Some time ago I purchased Simplicity 2724 , a Project Runway pattern. The pattern is versatile: choose a sleeveless bodice or add short or long sleeves. Neckline options include a jewel neck, v-neck with pointed collar, or v-neck with mandarin collar. Join the top to a slim skirt with a vent or a fuller skirt with released pleats. A wide fabric sash and front ruffle detail are additional options with this pattern. A special feature of all Project Runway patterns is a traceable croquis: a sketch of a figure with traceable skirts, sleeves, etc. to enable the user to draw designs before cutting and sewing them. Yardage requirements are listed for each separate element, making it easy to purchase one fabric for the bodice and another for the skirt if desired.

Today I was in Wal-Mart and decided to check out the fabric. (I'm so glad Wal-Mart put the fabric department back!)  For under $10 I got 4 yards of basic purple broadcloth to try out the pattern.  Now on to the croquis!  I'll be back later.
Posted by KSchimmel at 11:36 PM No comments: Links to this post

This blog will chronicle the creative process in one woman's sewing room.  Any topic involving fiber (the kind for knitting or sewing, not the dietary kind) is a possibility for my musings. If there is a topic you'd like to see addressed,  no matter how obscure the topic, ask me in the comments and I'll see what I can do.  I'm a librarian as well as a fiber freak, so I like to look for information.

Check back weekly and  I will try to give a more interesting post each time.
Posted by KSchimmel at 8:26 AM No comments: Links to this post

Fiverr Is Taking Over - Freelancers At Your Service! You're Busy. Hire Someone To Do It For You Instead Of Reading This Ad.